He started painting at a very early age and in 1968 set out to travel around Europe, where he could immerse himself in contemporary culture. In Rome during the Seventies, he worked for the theater and television as a set and costume designer. In 1975 he held his first personal exhibition in Florence, at the AxA gallery, and in 1978 he had his first personal show in Rome at the Soligo Gallery. In 1986 he was invited to the 6th Quadriennale. His folded paintings were presented to the public in 1990, after meeting Tommaso Trini at the personal exhibition Recent Works. In those years he held many personal exhibitions and participated in a number of collectives where he showed his new work. The Polena Gallery in Genoa dedicated a personal show to him, entitled “Voyages”. He created a large installation for the wall of the Mudima Foundation in 1994 entitled Piegare la notte (Fold the Night) and in 1999, in addition to his Foldings, a number of his small paintings on lead were also exhibited. Also for the Mudima Foundation, he as painted a number of large canvases using charcoal, where we can see “figured elements that seem almost human, shadows of presences, cycles engaged in discussions”, in Trini’s words, written when he curated an important monograph edited by Skira in 2003.
In 2003 he exhibited at the Mole Vanvitelliana in Ancona; that same year was invited by the City of Padua to hold a personal exhibition at Palazzo Moroni.
In 2005, Calabria promoted two important shows, the first at the Aragonese Castle in Reggio Calabria with a vast retrospective exhibition, Folded Painting. For the tower room he produced Deposito di stelle (Deposit of Stars), an installation consisting of large blue foldings stacked on wooden platforms, for which V. Baradel wrote: “[…] his blue light becomes solid color, folding itself into the jewel case of the canvas. […] The top and bottom form a brotherhood when the stars descent to the lowest point”.The second large personal show in Calabria is the anthological exhibition 1975 – 2005, curated by Philippe Daverio, at the monumental complex of S. Giovanni, in Catanzaro.
In 2006 he presents new works: his Bodies, as he entitles the personal exhibition at the MUDIMAdrie in Antwerp, are made of air and clothed in a smooth surface.
In 2007, an itinerant show of about 200 works documents the development of the artist beginning in the Sixties. It visits the MAC Museum of Goiania, the MAM Museo de Arte Moderna in Salvador de Bahia and the MAM Museo de Arte Moderna in Rio de Janeiro.
Between 2008 and 2012 his works are exhibited in a great many Italian galleries and institutions including the University of Calabria, CAMS, Centro Arti Musica e Spettacolo; 11th International Cairo Biennale; Anniart 798 Factory, Beijing; Studio Lattuada, Milan.
In 2012 the Rocco Guglielmo Foundation, the Rotella Foundation and the Vecchiato Art Galleries organize an exhibition in Catanzaro, at the Casa della memoria and church of St. Omobono, entitled Ice and Shadows. “[…] The installations Twenty-nine wrapped in blue shadow […] and Primordial […] are two stages that bring us closer to the crucial node, represented by the human being, in every visible form that surrounds us. […] (M. Meneguzzo, curator of the exhibition).
At the end of the year a personal show entitled Traveling Among the Stars was held as part of the RAM review at the Alinate San Gaetano Cultural Center in Padua, curated by L. Beatrice, where he cooperates for an installation with the Japanese musician KK Null (Kazuyuki Kishino).
Between 2013 and 2015 he participates in a number of prestigious collective exhibitions like The Book: of Art and the Artist, organized by the Italian Institute of Culture at Beit Ha’ir, the Museum of Urban Culture in Tel Aviv-Haifa, curated by C. Siniscalco; Artists in Space, from Lucio Fontana to the Present: a history of Italian environmental art curated by M. Meneguzzo, B. Di Marino and A. La Porta at the San Giovanni di Catanzaro; and Rigorismo in New York, at the Italian Institute of Culture and at the Unix Gallery, with the collaboration of the art gallery Centro Lattuada; … nel Blu dipinto di Blu… from Yves Klein, the magic of a color in contemporary art at the MACA (Museo Arte Contemporanea Acri, CS).
In 2014, the National Gallery of Palazzo Arnone, in Cosenza, organizes an important personal show entitled Compenetration, for which the artist designs his installation in relation to the works of several great master of the 17th century.
­ 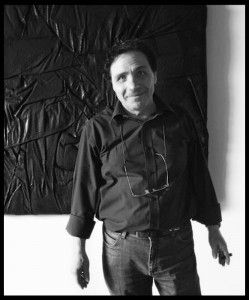